I've been trying to convince my girlfriend to have some implants for months. She always complained that they would look too big and she'd never be taken seriously. One day she finally said if what big fake implants was my thing, then she would do it. The next day we went to the clinic and we signed some papers just in case something went wrong with the surgery. One can never be too careful right? The only problem is that I didn't read the papers. Later I found that those were consent forms for certain operations to be done to me and control given to my girlfriend. I woke up in the hospital with a new weight on my chest. The papers were also for some body contouring. I already had a slim frame so all the surgery needed was some hips and butt implants, that was enough to give me an hourglass figure plus my new heavy breasts helped.

I later found that the papers let the surgeons reconstruct my penis into a new vagina but at the last minute, my girlfriend decided that a new experimental surgery was much better and safer. It kept my penis intact but inside me and it kept its high sensitivity. I've explored with my fingers of course and I have to say that I could not tell my equipment apart from a real pussy. At first people were confused because I had the body of a hot girl but an emasculated face. However, make up and a few follow up surgeries are slowly changing my face. It isn't that I want them but my girlfriend slips a sleeping pill on my drink at times and I always wake up on the hospital with something done. They have already changed my lips, noses and shaped my nose.

I have tried talking to the clinic that performed all these changes on me but whenever I go to talk to them, all they do is stare at my new boobs, comment how hot I look and what a great job they've done... and I'm never taken seriously!

TG caption: I'd fuck myself. 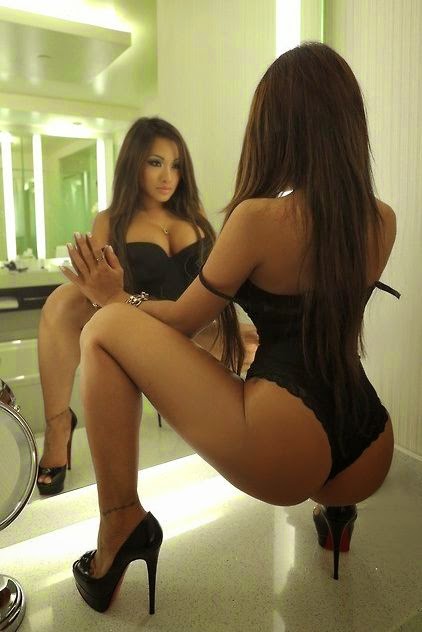 I can't believe I agreed to do swap bodies with my girlfriend. I've always been a red blooded guy but I could just not resist see what it felt like to try being a girl. Just getting ready for going out has been a struggle. I keep looking at myself at the mirror all the time expecting a huge hard on but all I really feel on my flat crotch is being moist and tingly all over. I keep wondering if my old body will grab my new hips and just ravage me from the back like I used to do it. Will I just bend over willingly and let my old cock enter me in new ways? I can't stop thinking about it. I guess I'm not as manly as I thought I was. I really don't look like a man at all anymore.