I recently met a pretty lady through this blog. Her name is Sadie and she has been crossdressing for some time now. I've posted about her on my twitter. Apparently my blog inspired, if one can call it that, to go ahead and suck some delicious (at least from what she told me) hard cock. Here is Sadie's account.


"It was...definitely an experience lol. It wasn't bad it just took a lot for the male part of me to want to do it lol. We were making out and stuff which was awkward enough for me at first but when he pulled his dick out (which was rather large lol) of his pants I almost backed out of it.

It was really odd for me being that close to another guys dick when he was hard so it took a little to get used to the idea of actually putting it in my mouth so we were laying in my bed and he started kissing me again and after a bit of that he took my hand and guided it down to his dick so I put my hand on it and started stroking it and then I stopped kissing him so I could see it and part of me was like "omg stop this!!" but I was also really turned on seeing my dainty little hands with their painted and manicured nails wrapped around his huge cock. As soon as I saw that it was like the girl side of me just took over, I stood up and pulled him to the edge of the bed and had him stand up and I put a pillow on the floor and got on my knees and started teasing him a little. Started with some little kisses and then a few licks before I finally started sucking him. It was like a completely different person was controlling me though, I dont think I could have stopped had I wanted to lol." 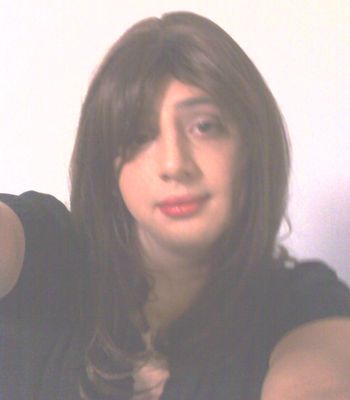